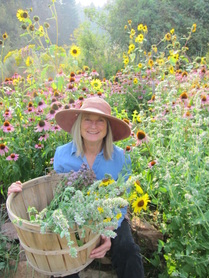 Facing East at 6100 ft. elevation, the Hodges’ overlook the vastness of the Great Basin. Eagle Peak to the West, watches over their off-the-grid home, organic gardens and gathering areas.
In 1982 Bill and Tina, and their two young daughters, along with dogs, cats, a pony, and a small llama herd, moved to a remote piece of land within a Federal Wilderness Area in the Northeast corner of California.
Bill and Tina continue to reside and care take this amazing place. Their only neighbors are the abundant flora and fauna found on the edge of the high mountains and high desert. They camped on the land from May to October for 14 years while they hand built their earth-sheltered passive solar ferro-cement house that Bill designed. This meant vegetarian cooking over an open fire, no electricity, and living closely with the Earth and all Her myriad of creatures, plants, and weather variations.
The llamas were their best friends as well as their livelihood for many years prior to founding Eagle Peak Herbals in 1996.
The family business was known then as Red Thistle Llama Ranch and they bred and sold quality breeding stock, pack animals and wool. During this time they homeschooled their daughters, grew their own food and medicines and harvested many wild plants. As a family they hiked daily with all their animals and explored the area intimately.
They were early members of United Plant Savers and began seeding and transplanting at-risk or threatened medicinal plants from all over North America to their land. Many species were already growing wild and just needed protection in the form of a perimeter fence around the 160 acres. The cleanest air and pure mountain water are abundant and the soils are deep and rich. Tina and Bill process their own compost with manure and waste hay from the llama herd and bluegreen algae from the pond. In turn the llamas are fed many of the herbs and the circle goes around.


Tina Hodge is an herbalist, photographer, and fiber artist. She was trained as a certified wildlife rehabilitationist and was the only rehabber in over 100 miles in any direction.  In the 80’s, she was trained by CCOF as an organic farm inspector.  She comes comes from a long line of Plant People.  Several Native American Medicine People have been her teachers in the past, and now the Plants themselves are her teachers. Animals and plants have twined their lives with hers and she was one of only a few herbalists to concentrate on the use of herbs for animals. In the 80’s and 90’s, Tina was a llama midwife entrusted with valuable pregnant llamas from herds around the country in late gestation. She has been a speaker at conferences on herbal treatments for animals and humans and does wild plant inventories for others desiring to grow medicinal herbs.  Tina is the herbalist and formulator of Eagle Peak’s product offerings. 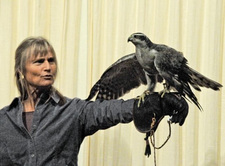 An avid birder and naturalist, Tina has been an environmental educator for years. She had the honor of training and handling a non-releasable feisty Northern Goshawk named Silica.  She and Silica brought both delight and awe to hundreds of children and adults.

​Tierra Hodge was homeschooled until she entered college. She has been an artist since she could hold a pencil or paintbrush. She went on to obtain degrees in studio arts and art history and finance.
She is a plant person extraordinaire, real estate agent, and sells artwork and antiques on her Viva Tierra Gallery on etsy. She keeps abreast of trends in the herb world and advises her parents on many things.